Now legendary players like B.B King, Albert Collins, Buddy Guy, Muddy Waters and many others took to the electric guitar like a duck takes to water. Their playing and innovation completely revolutionized Blues music and eventually lead to totally new styles of music. From their inspiration grew Blues styles such as Hard Blues(Tinsley Ellis, Johnny Winter and many others), Texas Blues(Stevie Ray Vaughn, Kenny Wayne Shepard, ZZ Top and many others).

In addition, the style we know and love as Rock and Roll was created by musicians such as Eric Clapton, Jeff Beck, The Beatles, etc. who were inspired by the great Blues players and took the music another step forward to create an entirely new genre of music. And, of course, we have one of the most iconic figures in electric guitar history, Jimi Hendrix, who blew our heads off and completely revolutionized guitar playing. The world of the guitar will never be the same.

The late 1960's and the 1970's saw musicians taking a step further and, using effects devices such as Fuzz boxes, phasers, flangers and a host of other types of equipment and creating hard rock. Bands such as The Who, Led Zeppelin, Deep Purple, Uriah Heep and too many more to mention all deserve their place in electric guitar history as pioneers of a new music genre.

And, speaking of pioneers, we have to include four guys from Birmingham, England, whose names are Tony Iommi, Bill Ward, Terence "Geezer" Butler and John "Ozzy" Osbourne. I know, you've never heard of them - NOT! Black Sabbath is without doubt one of the most pivotal and important bands in all of electric guitar history. The Heavy Metal story begins with Tony being involved in an industrial accident in which the tips of the second and third fingers of his fretting hand were lopped off. This would have ended most people's playing career, but not Tony's.

Tony decided to fashion "fingertips" to replace the ones he'd lost. He did so, at first, by melting plastic and forming it over his fingers to make "fingertips". Ouch, Tony, that in itself had to hurt. What definitely did hurt, however, was playing the guitar in standard tuning. Tony discovered that if he tuned the guitar down a step it wasn't so painful to play and also made bends easier. This had one other effect.

The dropped tuning resulted in a much lower, darker and heavier sound. Sabbath took it and ran with it and Heavy Metal was born. Guys, if any of you ever happen to read this, all I can say is, Thank You!! The very first album I ever owned was your debut album. The first notes of Black Sabbath grabbed me and I've been a confirmed MetalHead since then.

Black Sabbath - The GodFathers of Metal 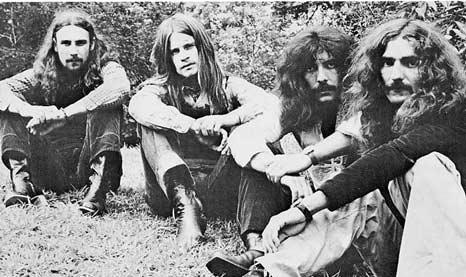 I realize that I've left some things out like Pop, Punk and other styles. This is not meant to slight them but I'm a rocker and I write from a rocker's perspective. In addition, I don't meant to slight by omission players like Randy Rhoads, James Hetfield, Kirk Hammett, Dimebag Darrell, Zakk Wylde and many, many others. There are only 24 hours in a day and what I intended with this part of the electric guitar history is to hit the high points in the development of musical genres since the late '50's.

In conclusion, I hope this short treatment of electric guitar history has been informative and worth your while to read. I only want to leave you with one final statement:

Have your say about what you just read! Leave me a comment in the box below.

Note: Blue button text is a direct link.
Black text means the button has a sub-menu.

Forget Your Day Job - Learn To Sell Your Music

This Site Powered By Site Build It!